on August 15, 2010
Well it's Sunday evening and my daughter's watching 'Must be the Music' on TV - X-Factor type music show with Dizzee Rascal who makes me laugh.

I was just flicking through one of my lovely old books, my favourite one actually, which is a book called the Sunny Day Picture Book from the 1930s. Came across a couple of half-tone Louis Wain pictures in there so I thought I'd pop one on here. 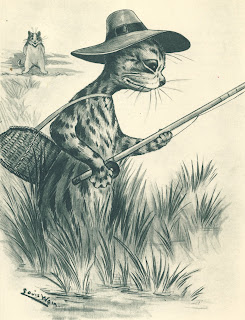 I think that I admire his work because it's different - he was inspired by his own antics when caring for his wife and out of that came his whole career. I love Eureka moments, wish they happened more often to me - I have nothing but respect for those people who make a career or a business out of something that just came out of their heads. Just brilliant.

I'm a cat person myself, dogs are fine but I've never had one. We always had a house full of cats when I grew up and it's no different now. We have 4 of them - had just 2 for 14 years, sisters from the same litter - Phoebe & Tabatha.

Phoebe was my favourite, very sweet and lovely (and really vicious through the stair-rails!) Unfortunately she had a couple of strokes 3 years ago and we had to have her put down - I was heartbroken. We still have Tabatha who is now 17 and deaf as a doorpost. She is totally annoying as she meows really, really loudly as she can't hear herself. She sits in front of my keyboard so I can't see the keys and I will often try and type and something funny will happen on the screen and somehow I'm always puzzled for a few seconds until I realise she's resting her tail on one of the keys.

We got Lily after Phoebe died, lovely cat, very similar to Phoebe in personality although she's a tabby, Phoebe was black and white. Then we got Scarlet, another tabby, who we got because my hairdresser was looking for a home for kittens and I couldn't say no. She then had kittens herself as I thought it would be a good thing for the children to experience. She had 3 kittens on our bed, starting about 4 in the morning! It was a lovely experience if a little weird!

We of course had to keep one of the kittens which makes 4. Our youngest is very much like Louis Wain's Peter in the picture - black and white and fluffy - and that's her name, Fluffy! This was the label that we gave her to distinguish between kittens, wasn't meant to stick as we didn't think we were keeping her but when it came to it, she was the one we chose. Her name is officially Scout at the vets (from 'To Kill a Mockingbird') but we can't get used to it and we all still call her Fluffy anyway. She's a darling, very affectionate in the middle of the night and I can't help stroking her when she demands. Between children and cats, I don't think I've had a full night's sleep in 11 years!