on August 12, 2010
No post yesterday as my head and neck didn't stop aching all day. It usually lasts a day or two when this happens and no amount of drugs will shake it off. Fingers crossed I'm almost headache-free today.

Despite the headache I still managed to get out for a walk with the children (as it wasn't raining yesterday, bit touch and go at the moment!) We went to our local common and picked some apples (bit small) and they climbed trees which they seemed to enjoy.

As I mentioned in a previous post, I've been working on some new stuff for Printable Heaven - Cecil Aldin's dogs and Oliver Herford's cats, both of which contain great images (if you like dogs and cats that is!) We wanted to slot in a little bonus set to get if you buy both sets so I looked a bit further into Louis Wain, whose work I hadn't looked at too much before. 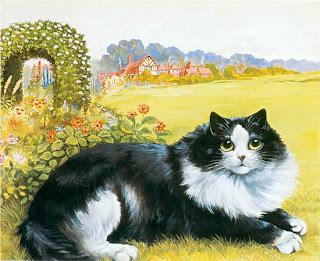 We must have had a Louis Wain book or something when I was young as the name was in my head and I remembered what his work was - comic, wide-eyed cats. I managed to get a lovely old book with a couple of colour Louis Wain pictures in a while ago from my local-ish old book shop (nearly left it behind but I went back for it!)

But anyway, Louis Wain (1860–1939) was an English artist best known for his anthropomorphised large-eyed cats and kittens. In his later years he suffered from schizophrenia, which, according to some psychologists, can be seen in his works.

At 23, Wain married his sisters' governess, Emily Richardson, who was ten years his senior (which was considered quite scandalous at the time) and moved with her to Hampstead in north London. Emily soon began to suffer from cancer, and died only three years after their marriage. It was then that Wain discovered the subject that would define his career. During her illness, Emily was comforted by their pet cat Peter, and Wain taught him tricks such as wearing spectacles and pretending to read in order to amuse his wife. He began to draw extensive sketches of the large black and white cat (I'm pretty sure that the picture here must be Peter).

Louis Wain's career continued after his wife's death but he ended up supporting both his mother and 5 sisters after his father's death. Not an easy thing on artist's pay and it was made all the worse by him not being a very good businessman - Louis would sell paintings outright to publishers which meant he had no continuing income from his work.

His mental health continued to deteriorate but as it did it's arguable that his paintings actually got better - it's a matter of taste I guess but I LOVE his later work.

When I've gathered enough material I'll do a whole set of Louis Wain but for now, I hope you will like the 6 sheets we've done.