on September 04, 2010
It's been a really busy couple of days here - I felt like superwoman on Thursday! I worked all day long from 9 in the morning until 11.30 at night with only a few short breaks for dinner and to collect the car from the garage.

Not only did we get the Mad about Cards 25p sale up and running but I also finished off the Christmas ladies set, made the cards and got it all live on Printable Heaven. Proud of my achievements I was (does that sound like Yoda?!) but I flagged on Friday afternoon and went home early!

Drank champagne Friday night as it was our wedding anniversary (11 years). It's been in the fridge since my birthday in July but we couldn't think of anything to celebrate before yesterday. Love champagne.

Anyway, I digress. I was thinking about Golliwogs as it seems that most of the 1930s children's book that I have feature one in some form in the pictures. The jury's out on whether they are offensive or not. 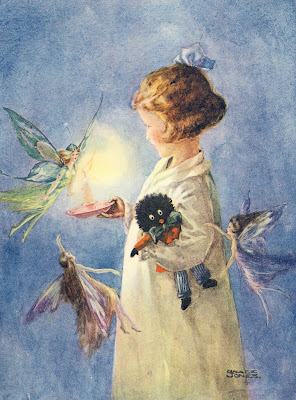 We certainly had a golly in the house when I grew up, don't think it was mine but I remember it (I have a brother and two sisters). We also collected the little figurines and badges that you got by collecting the tokens on Robertsons jam. I think they're worth a bit now, shame I haven't got one any more!

I never remember comparing them to any of my black friends in any way, it was just another toy. Never occurred to me at all, as I'm sure it never occurred to other children. 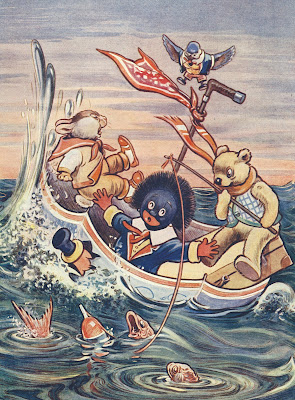 I wonder what was in the mind of their creator, Florence Upton, when she created them in the 1890s. I've just looked them up on Wikipedia to get the whole story - apparently she drew her first gollies after being inspired by a black-faced minstrel doll she found in her aunt's attic. She was only a teenager at the time and who knows whether she viewed her creation as any kind of racial slur or whether it was just a drawing, just a design. 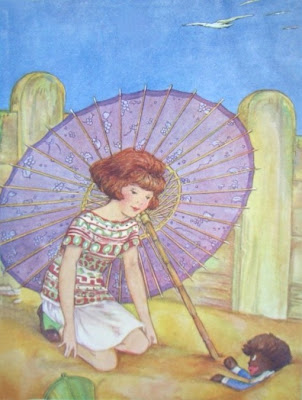 Whatever was in her head, the golliwog continues to be a source of debate. Political correctness gone mad or well-placed? I can't decide.