Had a hell of a week last week. Children home, out for days but still had work to keep up with. Worked hard, worked late and I feel I've been out of circulation for a while but I've still been here.

I thought I would be back blogging yesterday but I ended up feeling so ill last night that I didn't quite manage it, went to bed instead.

What I was going to say was.....Southend is becoming like a ghost town.

I grew up in the Southend area which is where I still live but now we are in a village about 4 miles out. On a Monday my daughter goes dancing not far from Southend Town Centre. It's only a 3/4 hour class so there's not enough time to go home but I usually take a walk up the road into Southend town centre. The walk takes me through Southend's previous business area, where insurance companies, banks and the like used to thrive - and where my first job was. The buildings are now mostly empty and desolate, a far cry from what they used to be 20 years ago or more.

I'm sure it's the same story in many towns today and it's just a little sad. I remember so well the girl who worked in the snack bar shouting 'Cheese toastie' when it was ready, just like it was yesterday, but now the building is covered in graffiti with the windows broken.

Usually my little walk into Southend is pretty similar - I walk, I think how sad it all is and then I go back and pick my daughter up. This week wasn't that much different BUT I did pop into a couple of charity shops, something I often do but mostly I come out empty handed.

This week was much better! I found 3 old books in the same series from the 50s that were just £1 each - bargain!

This picture is signed only as 'Mordern', who I'm struggling to find any information on:- 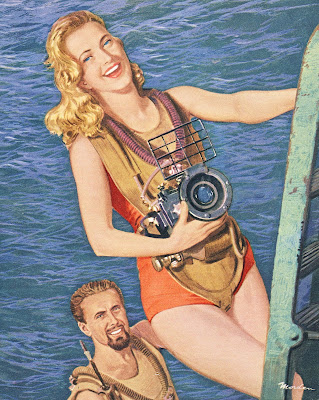 The books are published by Hulton Press who published The Eagle comic amongst others, so Mordern may well have been a cartoonist, but I can find nothing on him.

There are loads of black and white illustrations in my books too - I love them because they're so indicative of the time and the age they're from. Love the style, the fashion and the tiny waists! 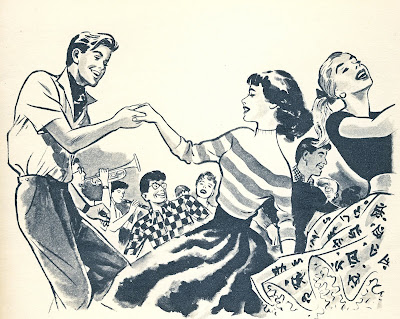 Absolutely loads more pictures in these books, will publish more over the coming weeks.