on March 29, 2012
Today I thought I'd share some charming pictures by Elmer Boyd-Smith from a book called the Seashore book, published in 1912 (the year that the Titanic went down!). 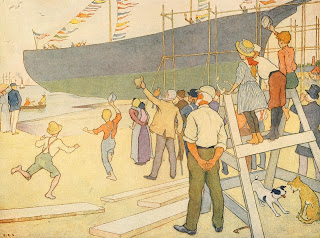 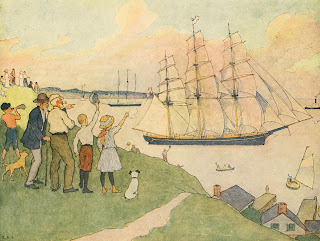 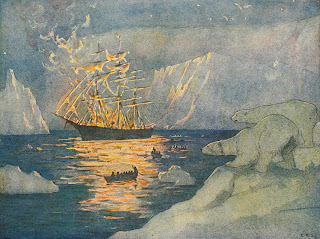 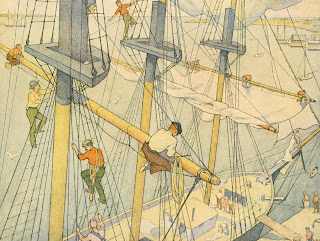 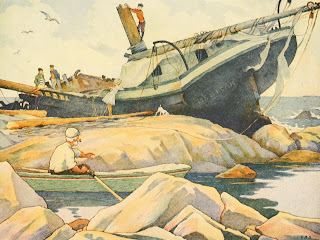 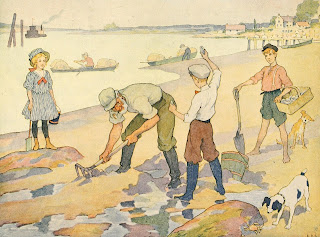 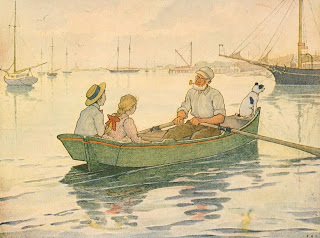 I love these pics, they seem somehow ahead of their time.

About Elmer Boyd Smith (from the Boston Public Library): -

Born in St. John, New Brunswick, and raised in Boston, Elmer Boyd Smith (1860-1943) spent several years studying art in France before finally settling in Wilton, Connecticut. While living abroad, Smith absorbed a wide swath of influences ranging from the muted, mystery-laden palette and epic vision of French muralist Pierre Puvis de Chavannes to the dashing graphic shorthand of poster artist Henri de Toulouse-Lautrec. He based My Village (1896), the first of the more than seventy books he illustrated for adults and children, on his summer sojourns in the village of Valombre, near Paris. Like so many artists of his generation, Smith, being acutely aware of living in a time of breathtaking technological and social change, dedicated himself in part to documenting aspects of the everyday world—sail power, the family farm—that he knew to be on the verge of disappearing forever.

Smith's first two children's picture books, The Story of Noah's Ark (1905) and The Story of Pocahontas and Captain John Smith (1906) immediately established him, alongside Howard Pyle and Jessie Willcox Smith, as one of America's leading illustrators for the young. He was well suited to the calling, thanks not only to his formidable skill as a draughtsman but also because of his genial storytelling manner and knack for conveying useful knowledge in a fresh, unforced, and delightful way.

Readers of today will find occasional evidence in Smith’s books of the extent to which turn-of-the-last-century American society—and the children’s literature to which it gave rise—was far less inclusive than our own. In Pocahontas, for instance, Smith offhandedly characterizes Native Americans defending their land as "stealthy red skins... shrieking like fierce beasts of prey." African Americans figure in the artist's world only as silent onlookers or as service providers—a galley cook in The Seashore Book, a dining car waiter in The Railroad Book. These "teachable moments" illustrate the basic truth that with the passage of time even books about history become a part of history, with unintended stories to tell about the era in which they themselves were created.

Still more fascinating, however, are the stories Smith did set out to record for the children of his own and future generations—tales of the golden age of transcontinental rail travel, of the last days of the great tall ships, of the timeless dignity of family farm life. Smith’s picture books are rich time capsules into which we are free to peer. And as early high points of the American picture book, they occupy an honored place in the legacy to all children left by Clara Whitehill Hunt.