Jessie Willcox Smith (1863-1935) was a lady determined to succeed in a male-dominated world.  She was originally training to be a kindergarten teacher but began painting after acting as chaperon in an art lesson given by her female cousin to a male pupil.  She took part in the lesson and discovered that she had a flair for it, so much so that she ended her teacher-training and enrolled in the School of Design for Women.  She soon realised that the school had little to offer her that would prepare her for an art career so she transferred to the Pennsylvania Academy of the Fine Arts from where she began her career as an illustrator.

She quickly established that she couldn't survive doing freelance work alone so she went to work in the advertising department of the Ladies' Home Journal.  The turning point in her career came following participation in the first ever illustration class offered by the Drexel Institute of Arts and Sciences in Philadelphia.  This class was being taught by the master of illustration, Howard Pyle. 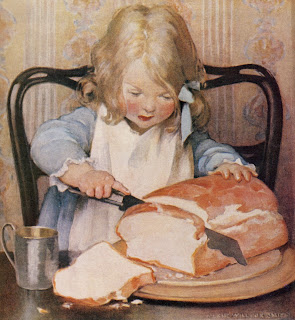 Pyle impressed upon her the need to become involved in the story and characters that she was painting.  Jessie became his most successful female student.  In 1898 she quit her job at the Ladies' Home Journal to concentrate on her career as an illustrator.  She quickly began to work for some of the leading periodicals of the period such as Collier's, Scribner's Magazine and Century amongst others. 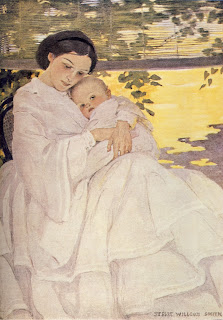 Although many of her pictures depict the joy of motherhood and childhood, Jessie never actually married.  Her lifelong goal was to be a successful artist.  Most of the big children's books of the time were illustrated by men - the work of women generally appeared in the lesser-known books that just couldn't compete with the very successful titles.  Time and time again the most prestigious assignments were given to men, so when a woman embarked on a career as an illustrator, her future was uncertain.

Jessie Willcox Smith was one woman who did break into this male-dominated world which was an immense accomplishment. 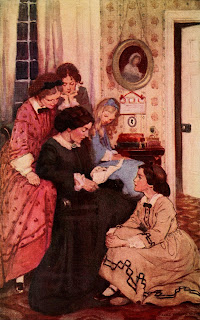